Kazakhstan, Kyrgyzstan, Tajikistan, Turkmenistan, and Uzbekistan are former Soviet states, and Mongolia was a Soviet satellite state. At the beginning of the 1990s, these Central Asian countries declared independence from direct and indirect influence from Russia. They started from relatively similar social and economic conditions.

This article will try to illustrate what has happened to socio-economics indicators since independence. 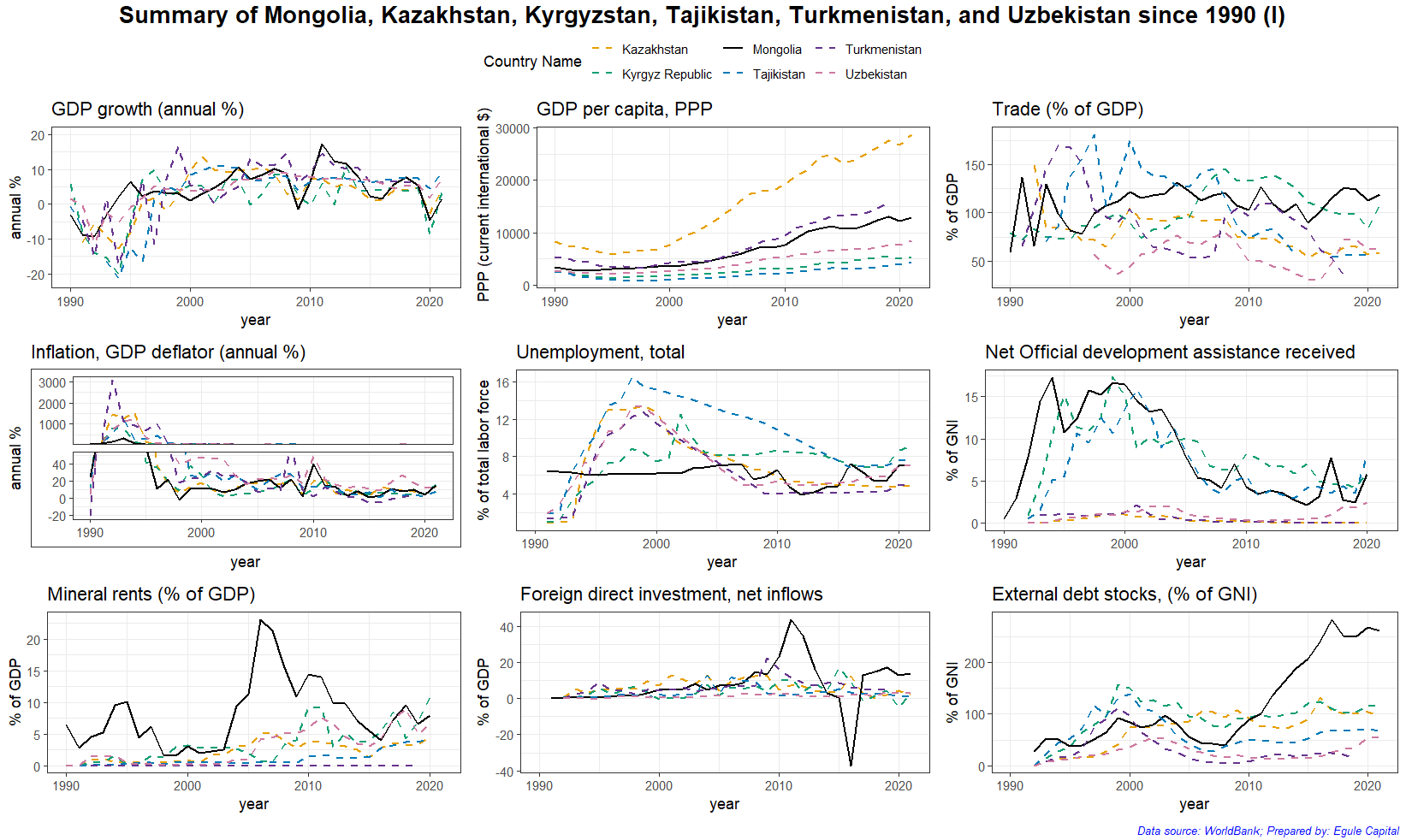 Mineral rents (% of GDP): Mineral rents are the difference between the value of production for a stock of minerals at world prices and their total costs of production. Minerals included in the calculation are tin, gold, lead, zinc, iron, copper, nickel, silver, bauxite, and phosphate.
Net ODA received (% of GNI): Net official development assistance (ODA) consists of disbursements of loans made on concessional terms (net of repayments of principal) and grants by official agencies of the members of the Development Assistance Committee (DAC), by multilateral institutions, and by non-DAC countries to promote economic development and welfare in countries and territories in the DAC list of ODA recipients. It includes loans with a grant element of at least 25 percent (calculated at a rate of discount of 10 percent).
Foreign direct investment, net outflows (% of GDP): Foreign direct investment refers to direct investment equity flows in an economy. It is the sum of equity capital, reinvestment of earnings, and other capital. Direct investment is a category of cross-border investment associated with a resident in one economy having control or a significant degree of influence on the management of an enterprise that is resident in another economy. Ownership of 10 percent or more of the ordinary shares of voting stock is the criterion for determining the existence of a direct investment relationship. This series shows net outflows of investment from the reporting economy to the rest of the world, and is divided by GDP.
External debt stocks (% of GNI): Total external debt stocks to gross national income. Total external debt is debt owed to nonresidents repayable in currency, goods, or services. Total external debt is the sum of public, publicly guaranteed, and private nonguaranteed long-term debt, use of IMF credit, and short-term debt. Short-term debt includes all debt having an original maturity of one year or less and interest in arrears on long-term debt. GNI (formerly GNP) is the sum of value added by all resident producers plus any product taxes (less subsidies) not included in the valuation of output plus net receipts of primary income (compensation of employees and property income) from abroad. Women Business and the Law Index Score (scale 1-100): The index measures how laws and regulations affect women’s economic opportunity. Overall scores are calculated by taking the average score of each index (Mobility, Workplace, Pay, Marriage, Parenthood, Entrepreneurship, Assets and Pension), with 100 representing the highest possible score.
Time required to start a business (days): Time required to start a business is the number of calendar days needed to complete the procedures to legally operate a business. If a procedure can be speeded up at additional cost, the fastest procedure, independent of cost, is chosen.
Prevalence of undernourishment (% of population): Prevalence of undernourishments is the percentage of the population whose habitual food consumption is insufficient to provide the dietary energy levels that are required to maintain a normal active and healthy life. Data showing as 2.5 may signify a prevalence of undernourishment below 2.5%.
School enrollment, primary (% gross): Gross enrollment ratio is the ratio of total enrollment, regardless of age, to the population of the age group that officially corresponds to the level of education shown. Primary education provides children with basic reading, writing, and mathematics skills along with an elementary understanding of such subjects as history, geography, natural science, social science, art, and music. 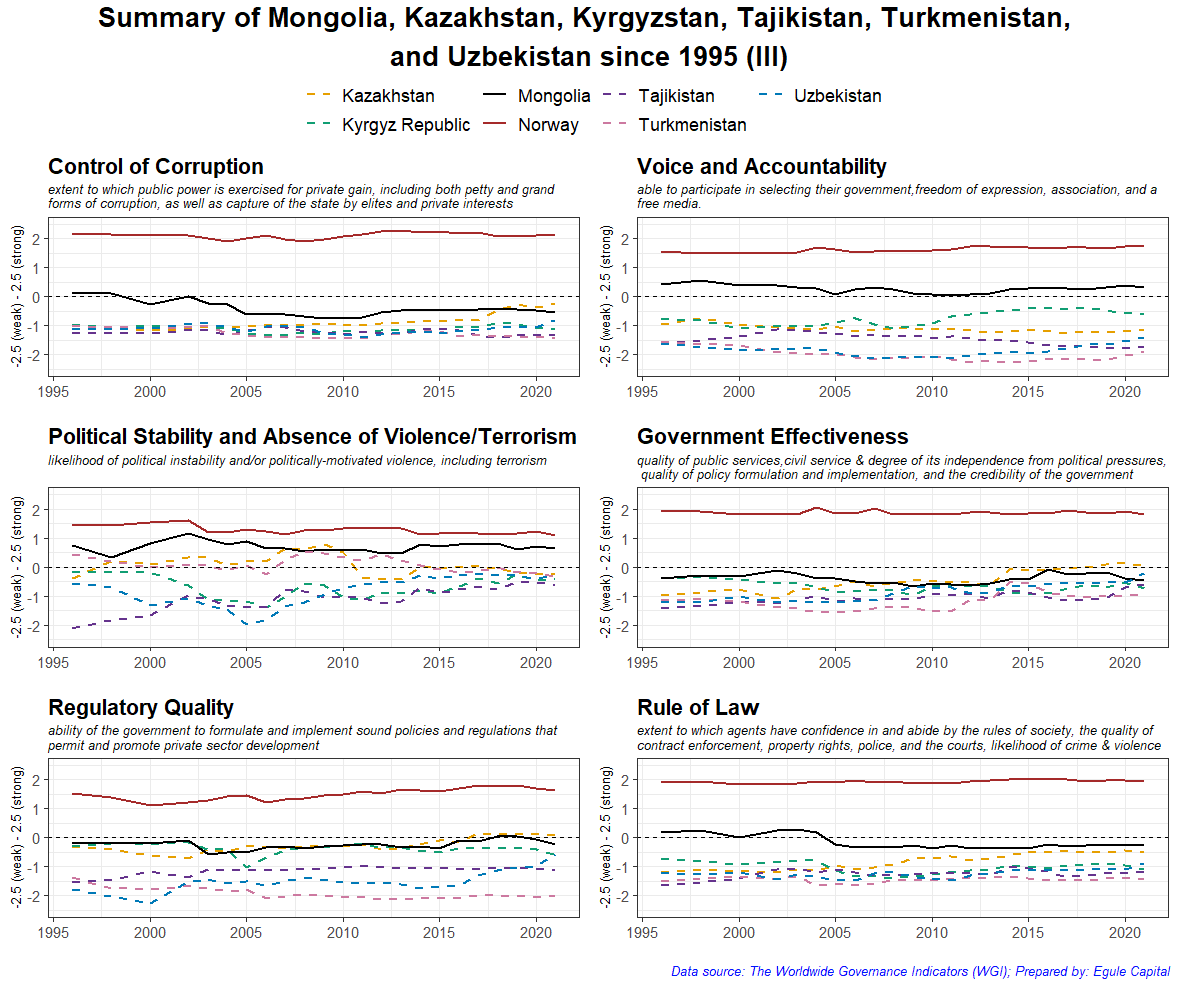 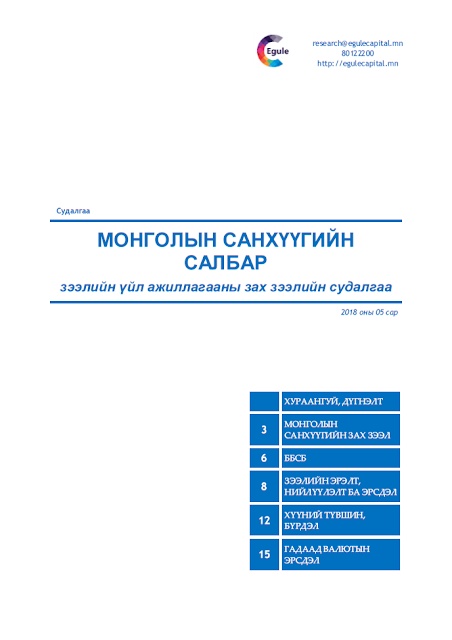